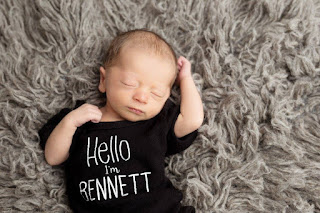 Bennett is our angel warrior. He has overcome more in his 2 1/2 years than most people go through in a lifetime. Anyone who meets him cannot help but smile and he touches every heart instantly.

Bennett had a very normal gestational period and birth. He was generally healthy and our only concern was that he was a little smaller than we expected. After a few days, it became apparent that he was having trouble gaining weight, but so did his typical older brother. When he was 2 months old and only 8 pounds, I started to worry. At 3 months old, he still had trouble lifting his head, couldn't track with his eyes, and didn't respond to his name. We mentioned our concerns to his pediatrician and we started physical therapy at 4 months for hypotonia and torticollis. He preferred turning his head to the left. He was also developing a flat spot from turning his head too often.

At his 6 month check up, we discussed our concerns with his doctor (not sitting up, not tracking, etc.) and right as we were leaving, I asked if maybe it was something neurological and we should get some testing done. She agreed and scheduled an MRI and an appointment with the neurologist. The MRI came out normal and I had mixed emotions. I was relieved, but also knew something was still wrong.

I arrived at the neurologist appointment not feeling too concerned. I thought she might wonder why we were wasting her time. Boy, was I wrong. She examined him for 2 hours and scheduled urine, blood, and chromosomal tests to be done. I asked what she thought was wrong and she replied that she had a "long list of possibilities". I was instantly very, very concerned.

Nothing much was discovered until at 7 1/2 months old, Bennett had his first tonic seizure. We were at a birthday party and Bennett was napping in his stroller. I happened to look down and see that his extremities were stiffened out in front of him and his face was turning from red to purple, his eyes bulging, and he wasn't breathing. I pulled him out of his seat and immediately layed him down to start CPR. At that moment, he started breathing again. In that short time span, I thought for sure my baby was going to die. I didn't know that he had a seizure. I almost thought it was kind of  heart attack. We called 911 and we took the ambulance straight to the emergency room. The doctor immediately assumed he must be sick and therefore had a febrile seizure, which would be typically harmless, and it was not likely to happen again. However, after taking his temperature and realizing that he wasn't sick, we scheduled an EEG for in a couple of weeks to see if there was more seizure activity going on.

The next two weeks were horrific. Bennett had two more of these every-mother's-worst-nightmare type of episodes and each time I thought I would lose him. I was afraid to go to work, for fear he would die without his mother with him.

His EEG testing day came and he was diagnosed with tonic seizures and prescribed Keppra. Luckily, those awful seizures stopped and we were calm for a few weeks. After a month or so, I noticed that Bennett was stiffening often and seemed to have extreme startle reflexes. I mentioned this to his neurologist and she said that it was probably just normal baby activity, but we'll schedule another EEG. The night of the second EEG at around 4:30, the doctor called me and said to get to the nearest pharmacy as soon as I could to pick up Prednisone to treat what he called "Infantile Spasms". The doctor also said to not look it up on the internet because it was a "very scary" situation. I narrowly missed the closing of our local pharmacy and picked up the medication in a panic. That night, after his first dose, Bennett cried inconsolably all night. Prednisone is awful on little bodies.

Bennett's Infantile Spasms improved for a couple of weeks, but then started up again, worse than before. He was on Prednisone for 6 weeks, until his neurologist determined that it just wasn't working. During those six weeks, Bennett developed "moon face", bloating, and would cry for hours straight every day and night.

Now that he had a diagnosis of the Infantile Spasms, the posibilities of what could be causing his issues became more narrow. Bennett's neurologist ordered a testing panel of rare genetic diseases characterized by Infantile Spasms, but it would take six weeks to get the results. That was a very long six weeks of my life. I actually ended up taking a month leave from work because I could not handle being away from my angel, who was suffering from these seizures day after day and it made it even more difficult not knowing what was causing this.

On May 4, 2017, I got the call. Bennett's neurologist called to tell me the results of the panel. She mentioned that Bennett was missing a protein and that boys were affected much more severely. I don't think she even mentioned the name, CDKL5. She said she would send me a link to the website and a Facebook support group. Bennett was 11 months old. Our lives were changed forever at that moment. We embarked on a journey filled with pain, sadness, hope, unconditional love, inspiration, and the rest is still left unwritten... 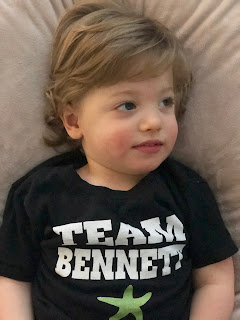 When you find out you’re pregnant for the second time, you are fairly confident that everything will go routinely. You’ve been through this before, you don’t have time to worry about the “what if’s” and you figure that the chances are you’ll have a healthy pregnancy and baby. My pregnancy with Bennett went fairly smoothly, nothing too concerning or  abnormal.  After he was born, he was slightly smaller than we anticipated, but again, nothing too concerning. His first few months he struggled to gain weight, but so did his older brother, so we weren’t too  worried . At about 3 months, I was looking back at pictures of my oldest at that age and realized he was holding his head up and tracking with his eyes better than Bennett was, so I mentioned it to the pediatrician at his check-up. She agreed that he needed to work on head control, so we started physical therapy by 4 months. At our  6-month  check-up, I was growing more concerned because Bennett still wasn’t tracking, responding to
Read more 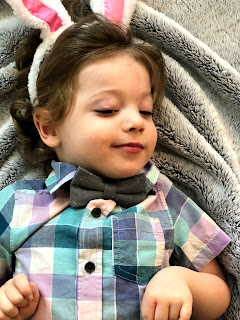 After Bennett was diagnosed with a rare, neurodevelopmental disorder called CDKL5 Deficiency Disorder at 11 months old, I was told that the future was unknown for him, that he would “write his own story.” That was the most positive thing we heard. Then we were given some websites to visit and we read about the statistics for a child like Bennett and it was grim, to say the least. The neurologist and the geneticist chose their words carefully, careful not to be too devastating and careful not to be too positive, in case we were to become disillusioned about our son’s condition. We were also told to call our regional center to seek an assessment and servi ces as soon as possible. What they didn’t tell us was how we were in for the fight of our lives… for services, for medical equipment, for the best care possible for our child. The fight for services…  the fight for medical coverage…the fight for the safest and most effective anti-epileptic meds… the fight for medical equipment…th
Read more 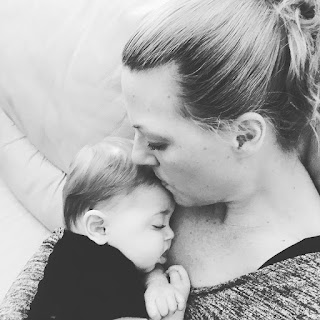 The unknown is terrifying. The anxious, helpless feeling of not having a diagnosis is debilitating. You have no control. You have no power. You walk by a giggling baby saying, “Mama” at the grocery store. With a punch in the gut, you are reminded that you haven’t seen your baby smile in three weeks. The clerk asks how your day is. You briefly debate mentioning that you were holding your crying, seizing baby in your arms just that morning, feeling powerless and decide, instead, to say, “Great! How’s yours?” You then wait until you’re in your car to let the sobs escape and the tears stream down your face. Any “little” thing is a trigger- a tipsy toddler walking about, a friend’s nine-month-old saying their first words, a monthly milestone birthday, a friend’s social media post announcing one of her baby’s many firsts, brand-new and hand-me-down baby toys that are collecting dust in the garage… You know there’s something terribly wrong with your baby, but you don’t kno
Read more